Franck NOTO, also known as Zest, was part of that first wave of artists who made graffiti popular in the South of France. Based in Montpellier, from very early on, with his crew TDM, he built bridges between the illegal world of graffiti and the city halls and institutions who introduced his work into many circles all while sustaining it. As a result, through a combination of city hall’s authorizations, public and private partnerships, murals have been created throughout the city of Montpellier. This approach, rare at the end of the 90’s and early 2000’s, demonstrated that in addition to his intention to register his work over time, Franck Noto already perceived himself not only a graffiti artist, but as an artist. His use of drawing and the incorporation of figurative aspects in his murals also illustrate this perception. Franck had very early on decided to take his work beyond letters. During the earlier parts of the 2000s, working in a studio became more and more important to him and he was eventually invited to exhibit his work for the first time in 2006. Street Art was only in its infancy at the time and, especially outside of Paris, graffiti artists were poorly represented in galleries.

But the Street Art scene was lively and enthusiasm growing. Franck Noto therefore further developed his studio practice while continuing to paint in the streets. It’s only natural, that in his first works on canvas lettering and characters emerged, as well as the use of a « tangy » chromatic scale characteristic of the artist’s style. Over the years, Franck’s style asserted itself and the outlines of his letters and characters faded to give way for those that would be at the center of his work: abstraction and energy. Today, Franck Noto’s paintings are built around the idea of layers and can take very different forms. Working in series, he replaces the previous one with the next, never repeating a period that he feels has been completed. Without reservation, he explores his creative potential, innovates techniques and lets his talent as a colorist speak for itself. Franck’s strength lies in the appeal of his paintings. They’re attractive, colorful and joyful like their creator and his environment. However, behind these simplistic aspects hides a more complex construction.

A technical search that combines solid tints, successive layers, scraping to reveal this or that section or this or that layer of paint, always in keeping with the former graffiti artist’s touch. The necessity to spray in one stroke prevents errors and brings spontaneity to the composition, which brings the work to life. The layers that have been brought to life through Franck’s work, illustrate the depth of personality individual to each of us. He also views the layers as representations of the various experiences one accumulates. Each is ultimately dependent on the previous one, shapes the next, and cannot exist alone. We are made up of our experiences, constantly evolving and are much more than what might be initially perceived. These elements are exactly what Franck Noto’s work embody. 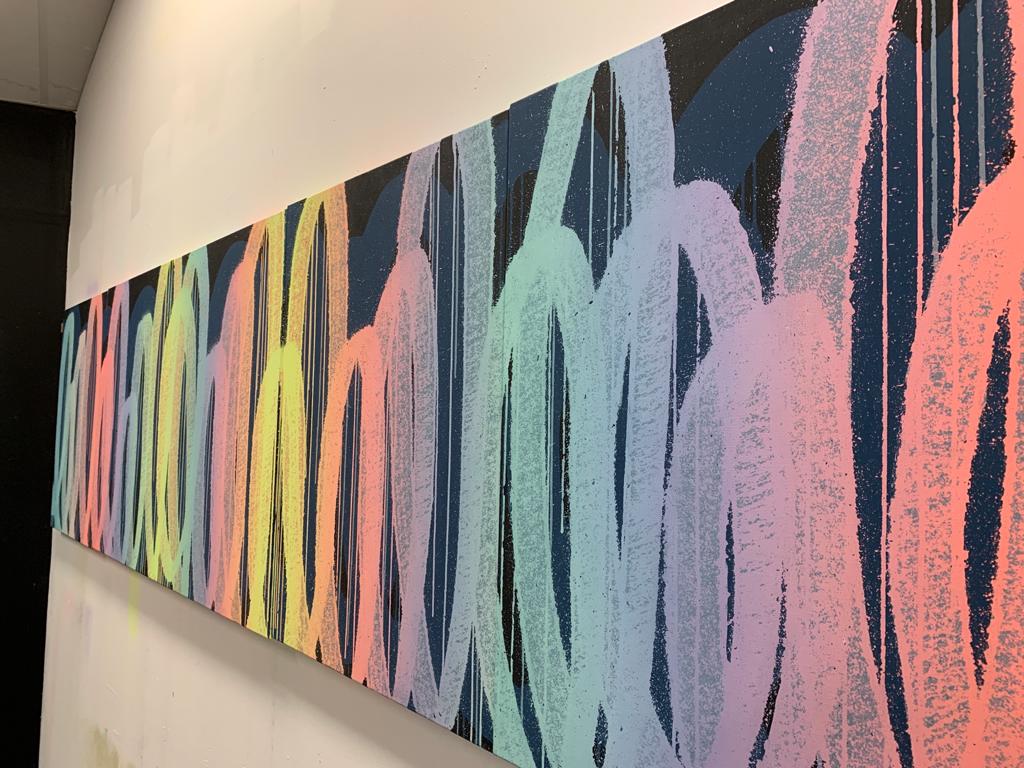 To not miss anything about news, upcoming events and latest projects, follow Franck Noto on social networks !